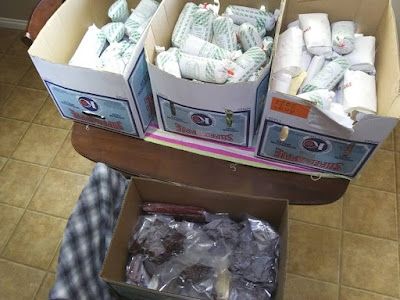 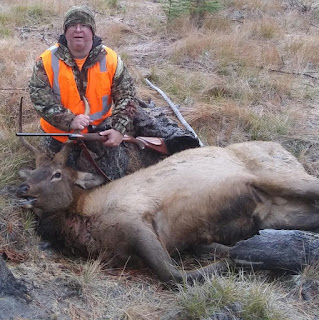 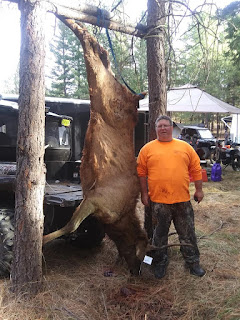 While taking advantage of a pretty beautiful spring day to do some backyard cleaning, I found this: 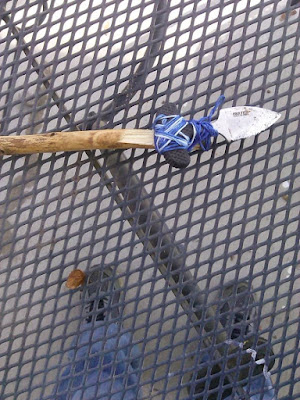 My youngest daughter took a stick, some yarn, and the Cold Steel Urban Pal I keep in the back yard for cutting open random bags...and made a spear.

After counting the chickens, I called my daughter out to ask exactly what she was thinking...and I became a victim of my own preparedness wishes.

'But dad...do you want the first time I try this to be when I NEED to be able to do it?'

Dang...she had me there.  All I could do at that point was reinforce the expectation that it was not a toy to play with around friends...and if she was able to sneak up and use it on a squirrel, she was going to eat it for dinner.
at 8:31 PM 1 comment:

A buddy of mine who is a State Trooper shared the link below on facebook, which leads to a news story out of Winnebago County, Illinois.

Apparently back on January 20th, a bad guy walked into a bank and started shooting into the ceiling.  The bank security officer responded by drawing and putting two rounds into the bad guy. The County Attorney released the bank security video today, along with word that the Security Officer would not be charged, and in fact Brian Harrison is a hero.

I recommend you click on the link, and watch the video.  My words do not do it justice.  Mr. Harrison went from Condition White, resting on the counter, to putting rounds into the bad guy...in between breathes.

One can only hope to respond that way when the chips are on the table.

And, well done to the local authorities for not pressing charges...that is not a guarantee in Illinois.
at 8:42 PM 5 comments:

Earlier this week, my daughters school was having a cupcake bake-off fundraiser, broken down into different categories by grade, and box mix vs. Scratch.  Since it was for a good PTO cause, both my daughter and I decided to enter cupcakes...and if I am going to play, I play to win. 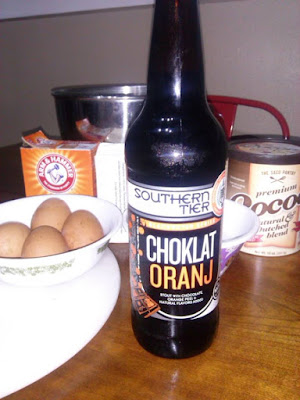 Since I couldn't get to my preferred website for recipes, I had to find a new one, and I settled on this Chocolate Stout Cupcake. The only thing I really did to mix it up was using the Southern Tier Choklat Oranj Stout, instead of something more...mainstream. I thought the orange might add something a little extra to the finished product...and it did. The best part of any cupcake is usually the frosting though, and the vanilla bean cream cheese(actually, Neufchatel Cheese) came out great.

My wife had baked cupcakes with my daughter earlier in the day, but had me to help make the frosting for her cupcakes, and so we just did a simple butter cream frosting for her. She learned the importance of 'pulsing' the mixer when playing with powdered sugar, but not until we had a fine cloud of it spreading around the kitchen.

In the interest of 'victory', looks being as important as taste in competition like this, I finally broke down and ordered a piping bag/decorating kit off of Amazon.  What a game changer.  It is going to take a while to master the technique, but my daughter loved piping frosting on vs. trying to use a spatula. 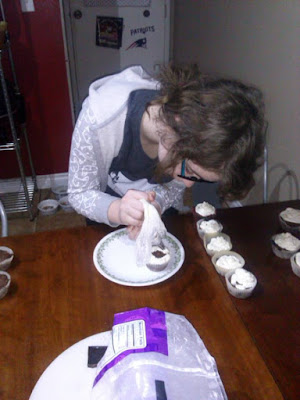 In the end, I felt kind of bad for my daughter.  She didn't win in her category.   I will admit some of the other cupcakes looked, and tasted a bit better than hers, but to my eye, some kids had a LOT more help their parents. We supervised, and then, I helped fill the piping bag so there wasn't a huge mess...but heck, some of the 4th graders had fondant on theirs!  What 4th grader plays with fondant without major parent help.

I did win the adult category, and got a sweet ribbon to prove it. I'll probably let my daughter put it in her room. 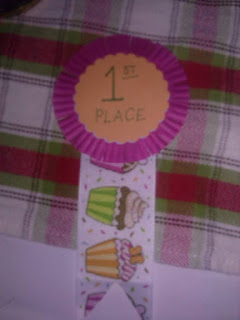 Haven't blogged in a while.  More than a while. Like...18 months.  It wasn't one of those 'so bored, and haven't taken over the world yet' absences.  It was actually kind of superstition thing.

You see, my last post was about how I had returned from elk hunting 18 months ago for my daughters birthday...but before coming down from the hills I has seen two legal spike elk...and I think I said something like 'Can't wait to get back up and nail one of them there spikes!'

Of course, that was a total jinx.  I didn't even see those two spikes again...or any other legal elk.

Having learned a lesson about showing signs of optimism, I decided the prudent/superstitious thing to do(much like turning your hat inside out and backwards to spark a rally) was to not blog again until my hunting was successful.

Yeah...you can guess how that went since I didn't break my blog silence during the 2016 hunting season either.

But now, something dire has happened, and I can't remain silent any longer.

More dire than the last election cycle which I sat quiet during!?!?!??  Yup.

Sometime in the last month or two, one of my favorite blogs has changed it's permission for access, and I can't get there anymore.  90% of my favorite recipes come from Brigid's Mausers's and Muffins/Home on the Range site...and now I can't get there!  And of course, I never actually printed any of them out, because...internet.

So...if anyone can hook a brother up, I would appreciate it.

Turns out I was so not ready to go hunting that I didn't even have spare time to type up an 'I'm outie!' post.

My first 48 hours up on the hill were no good.  I hunt in wide-open sage brush country, and Friday afternoon, we had a front pass through...temperature didn't change much, but we did get some scattered rain, and wind....25 sustained with 40 gusts.  Truthfully, I'm impressed that my little tent didn't blow away. 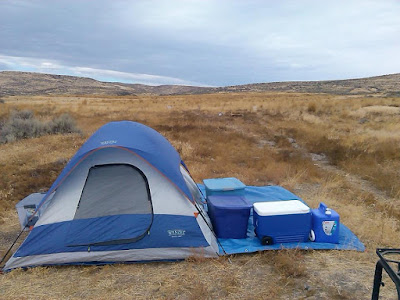 Even though it didn't blow away, it was not a pleasant place to spend the night.  The shaking and wildly whipping sides of the tent made it a loud home.  Add in the fact that my air mattress had a leak in it, so, after two hours I was sleeping on a rock...well, I think I got about three hours of sleep Friday night.

Saturday, opening day of the season, was anti-climatic. I hunted the same are where I saw two bucks and a few does consistently last year...but this year, nothing.  One doe for 13 hours in the field.  And it was still a breezy, drying out kind of day.  Sucked the moisture out of you with a steady breeze and highs around 80.

Sunday was better.  Had a full nights sleep with a new mattress I ran into town to buy. And I saw 4 does in the morning.  In the afternoon, I went and kind of checked out a new area.  It's a place I had been to before, I just went 'one more ridge' over...and it was worth it.  I found a draw that is actually a creek for a few weeks each year, and might even have a little natural 'seepage'.  Enough that there were actually green trees growing. Which, as you can tell from the picture above, is not common.

One of the frustrations with muzzle loader hunting is that unless you sit down on a specific game trail, you can usually see more area than you can hunt.  In this case, I picked a position that let me see several draws and ridges, so I could get a good idea of animal traffic around the hole.

I was pleased.  Within half an hour, I had seen 4 does leave the area.  Then 2 spike bulls(all I am allowed to shoot), came in together, loitering about 250 yards down the creek bed from where I was. After about 40 minutes they headed off.  Then about a half-hour before the sun stated setting, another group of elk, 5 cows and a nice 6x6 bull showed up.

So...I'm excited to try to get back in there, picking a better spot I where I can hopefully get a shot.  200 yards is just too far for me and my muzzle loader.

I haven't gone back in yet because I came home Monday for a break.  Needed to refill the cooler, and shower...and wish my daughter a happy birthday.  It is my younger daughters bad luck that her birthday ends up being early in elk season. I have missed 5 of them in a row...so this time, I decided I would come home for it.

It was a good decision(even if Sterling's is her favorite restaurant.) 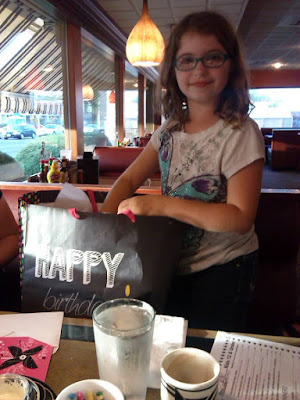 Worst case, I get back into that hole and find a boned out elk carcass...but, I didn't see any other hunters on the ground within a mile or two of where I was hunting, so, it was a chance worth taking. My little girl isn't going to turn 10 again.